For those that be thinking about investing in one more bike…

After a fair bit of investigation and research, mostly online, I purchased my gravel bike a few weeks back. Since then I have had the chance to test it on gravel in the Otway ranges and on the road at the Friday Friendly BRL.  After the big reveal on the Friday ride several riders said that they were considering a gravel and were curious as to how I ended up with mine. So here ’tis…

The gravel bike is an emerging and, apparently, increasingly popular trend.  There is an enormous range and variety from the traditional road bike manufacturers through to mountain bike specialists and pretty much everyone in between.  The gravel bike is being positioned as the ’do everything’ bike in your garage by some manufacturers – commuter, bike packing, gravel trails, single track, coffee…  Others are targeting it is a special purpose bike to fill out your stable.

I am not an expert in the space!  I received some great input from Justin M, Gavin R, Kym T, Phil Sh, Gary D, Herb, plus a couple of bike shops that actually had some stock.  It was an interesting research project and I am very happy with the end result.

The long list also included Merida Silex (both 400 Aluminium, 4000 Carbon) and the Polygon Bend R5 – Indonesian manufacturer who, after manufacturing for other brands has decided to launch their own under the Polygon brand.  All the majors have released or are releasing excellent gravel bikes in a variety of frame materials and component specifications across multiple price points.  As I was working to a budget a lot of the big names were cut from the shopping list (Cannondale, Specialised, BMC, Trek, Giant to name a few).

Having had a great experience with my Canyon roadie I was very tempted by the Canyon Grail.  The Focus Atlas looked very good too. Very similar geometry and specifications (as with Trek Checkpoint and Specialized Diverge aluminiums).  Unfortunately neither bike would be available until the second half of the year at the earliest.  I was actually able to see the Norco Search in store.  The steel frame felt lighter than expected and the steel flexibility and robustness really appealed to me.  My Condor steely has always been a very comfortable ride.  A number of the reviewers were very positive on steel frames for the gravel setting and finally feedback from Herb, who had been servicing the Norco for a client, was also positive – all pointed to the Norco Search for me, plus the bonus of it being a little bit quirky.

The first gravel ride was through the Otway ranges with Phil Sh, Kym T, and Stephen G.  Fair to say the Norco Search fully met my requirements and expectations; held pace and line well on tarmac – Great Ocean Road and fast descent from Erskine Falls back to Lorne, excellent ride on the gravel Wye River-Forrest-Lorne – the 700×42 tyres were ideal for the surface, brakes excellent, the gearing was well suited to the climbs, and handling was good on the single track – albeit a relatively easy single track (I am a beginner!). 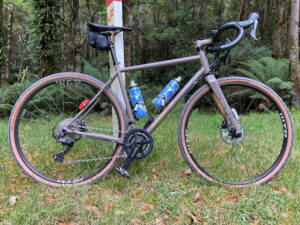 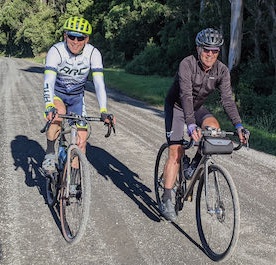 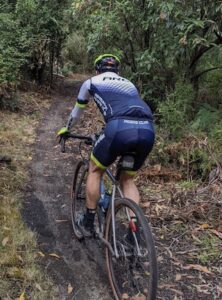 I have some video footage (17min!) from the Otways adventure if you are interested in more about the attractions of gravel riding.

All bodes well for some more off-piste fun rides on trail, gravel and track over the coming months and years.
[After I get through some of the initial setup and fit teething issues 🙂 ]